If you haven't seen the documentary COMEDIAN with Jerry Seinfeld, it is worth a watch. The concept is Seinfeld retires all his material and starts working on a new hour. It is really inspiring to see someone who is at the top of their game struggle while working out new material from scratch.

My good friends at FLAT EARTH GLOBAL and ROOKS THEATRE have started up a monthly show at the STAIRCASE THEATRE in Hamilton Ont called The Big Show. It's a rotating cast, and every show is full of comedy, music, sketch, short films, and occasionally some magic. If you want to have a great time, and watch people making stuff, come check it out! (Below is a description ripped right from their site.)

An interdimensional being summons a group of “teens with attitude” to help him defend the world from evil. Unfortunately, he accidentally summoned the high school drama group. Unable to fight, he assigns them the task of performing a monthly BIG SHOW that bring him up to speed about the current state of the earth. Music, comedy, magic and short films. Think Power Rangers meets Kids Incorporated teabagged by Kids in the Hall. Starring a rotating cast including Vicktoria Adam, Tyler Brent, Luke Brown, Stephanie Hope Lawlor, Kristian Reimer, Ryan Sero, Nick Wallace and Laura Welch 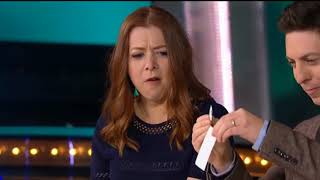 One week until FOOL US

I am an artist